Although the Hanoi Tower problem very basic, by studying it, we learn thinking in recursive way. Generally we should analysis the base cases and reorganize the problem into subproblems. The different thing from 4th edition is that, in 5th edition, it’s required to use stack to simulate the tower.

In the classic problem of the Towers of Hanoi, you have 3 towers and N disks of different sizes which can slide onto any tower.The puzzle starts with disks sorted in ascending order of size from top to bottom (i.e., each disk sits on top of an even larger one).

You have the following constraints:

(2) A disk is slid off the top of one tower onto the next tower.

(3) A disk can only be placed on top of a larger disk.

Write a program to move the disks from the first tower to the last using stacks.

First, let’s check the base case. 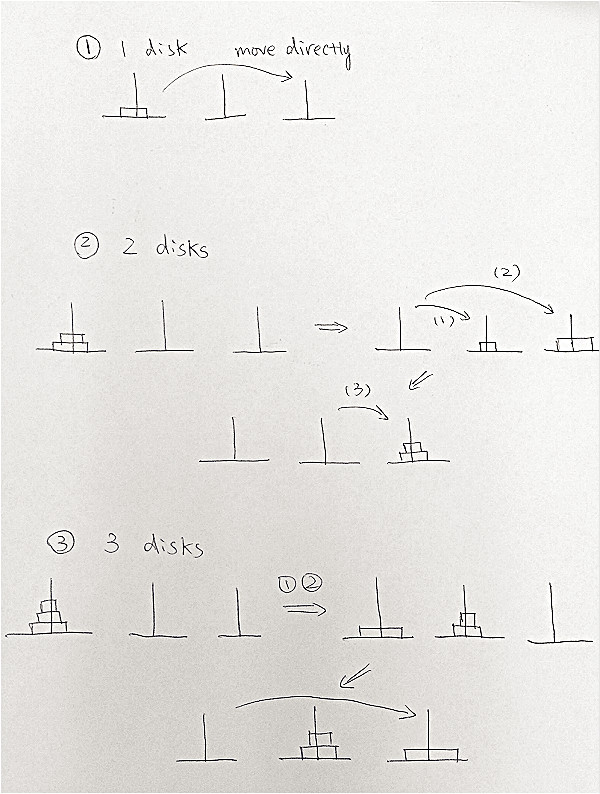 For last 3 steps, the buffer tower is changed. The source tower is used as a buffer.

Assume we need p steps to finish moving, at q step the situation is always like this:

So the problem is split into 3 parts.

Clearly it’s a natural recursive algorithm. The implemetation is below. Notice that at different step diffrent tower is used as a buffer.

The complete code is on GitHub.